The RSI indicator or the Relative Strength Index as it is known in full is an indicator that is used to measure overbought and oversold conditions; it was created by J. Welles Wilder.

The RSI indicator is a momentum oscillator meaning that it swings within a given number of level all depicting a certain amount of  sway in where the market is at.

The meaning of overbought and oversold is simply the speed in which price changes over a given period of time, and that is what the RSI measures.

The RSI should not be used in unison because it carries with it a given set of information and that is not enough to give you a bias to what and where you are supposed to place a trade.

RSI Indicator: What You Need to Know?

There are various sets of information that one can get from using the RSI indicator.

The information acquired is important to the trader based on the following; it gives overbought and oversold conditions, divergence, and it gives indications of existing trends.

The RSI is calculated using the following formula:

Using the following formula you are going to acquire the Relative Strength Index but the RSI indicator calculates automatically from the data displayed on the charts and plots the movements.

When setting the indicator, you should also include the number of days that you want the indicator to derive its data from. It is set on 14 day period as a default setting, but this is customizable according to your preference.

The fact that the RSI indicates overbought and oversold conditions do not mean that one should sell or buy but rather an indication of a shift or an oncoming change in price direction.

Acting only based on these indications may lead one to a compulsive decision that may lead you to a losing trade.

The overbought and oversold reading should be used as a confirmation tool to something that is more indicative of a turn in price direction.

The divergence is set when on the price chart, price forms a lower low and the RSI indicator forms a higher high.

This means that there is a break in correlation and there is likelihood the increase in up closes as noted on the RSI indicator and the lower prices formed on the price chart note an onset of higher prices. 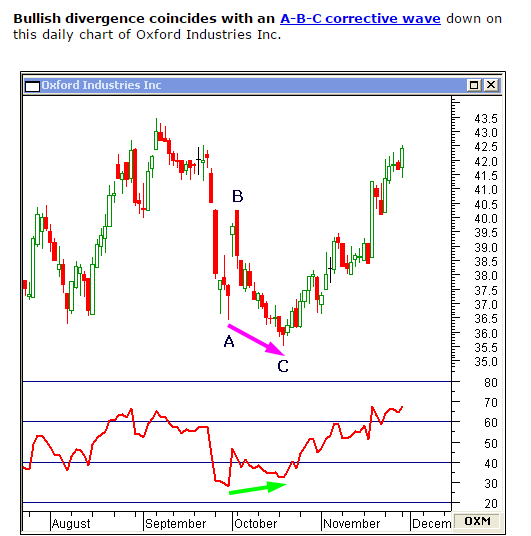 This bullish divergence acts as a warning sign to the traders who were short to start exiting their positions. The traders who had levels they were anticipating a bounce in price, and they get this signal, will have the further reassurance that buyers are ready to come into play and push prices higher.

Using this signal in relation to another more dominant price action patterns will give you a high probability trade.

This signal should not be taken on its own; it should have a confluence of other things like a level of resistance that has held, a candlestick pattern that indicates a reversal of an inverted hammer or some other pattern.

When all this come together, and you have your bearish divergence, then you have yourself a high probability sell setup.

Traders will often look for trends in order to trade in the direction of the trend rather than trade against it and risk being stopped out.

When you have these levels noted, and you know which side of the market we are at, then you can trade with in sync with the trend and capitalize on the major moves.

The RSI also offers failure swings which can also mean a change in the current market flow. The parameters set for a failure swing to occur either bullish or bearish are as follows.

When the RSI moves from above the 70 mark and breaks it lower, and the swing that follows after higher fails to take it out, that means that there is the likelihood that a bearish stance is likely to begin.

The swing failure for bullish prices is anticipated when price breaks above the 30 mark and the swing that follows after fails to take it out then that is an indication of bullish price from here henceforth. This coupled with other signals in price and market structure will really help refine this idea.

The RSI is usually combined with other indicators to refine the readings offered by price. The two can be used together to get a buy or a sell signal.

The MACD can be set to its default but the RSI can be adjusted to a 7 day period, and its 50 mark is very important. The MACD is a used for timing and the RSI for momentum.

To buy the RSI should be above 50 and the MACD above the 0 line, buy at the close of the candle and hold until the conditions change.

To sell the RSI should be below 50 and the MACD below the 0 line, sell at the close and hold until it offers a different signal. That is how you utilize the MACD RSI indicator to buy and sell signals.